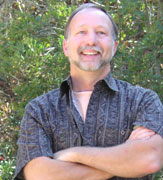 Philip C. Johnson, RA, GBC
With a background as both Architect and General Building Contractor, Philip C. Johnson, RA, GBC enables the firm to maintain a realistic perspective on budgets and technology while maintaining a guardian's role on design driven concepts. A firm foundation in planning and design has enabled him to employ sometimes experimental and state of the art technology to achieve otherwise intrinsically evasive solutions, under budget and on schedule.

Following hands on training in Planning & Design, Plumbing, Electrical, Rough and finish carpentry, Masonry, Scheduling, Budgets and many other aspects of construction dating back more than forty years, Philip completed a five year degree in Architecture at the prestigious California Polytechnic University at San Luis Obispo. While there, he acted as caretaker, added to and lived in the infamous Poly Canyon experimental projects area where students would complete thesis projects in construction, engineering and design under the tutelage of such architectural greats as Architectural School founder George Hasselien, FAIA; Dean, Instructor, California State Architect and working architect Paul Neel, FAIA; and design visionary Buckminster "Bucky" Fuller. The foundations of lessons learned in the field can be traced through to his design and planning projects of today.

After completing internships with such local architectural greats as Will Shaw FAIA, and, Fredrick Christensen FAIA, he opened his own firm completing projects across the spectrum from elegant new residences and remodels to the famed interiors for the Outer Bay Waters wing of the Monterey Bay Aquarium. Throughout the years serving on various boards, commissions and volunteer organizations:

and earning accolades such as:

With more than a quarter century in design and construction the award winning and internationally published Johnson Architectural Group utilizes the latest computer technology and an experienced staff who incorporate an 'out of the box' mentality to create solutions that blend with the environment, fit the needs of the client and become an integral part of the community.

Our commercial client base includes among other satisfied clients: