Completed 1993
Monterey, CA
17,000 s.f.
Completed as a tenant improvement in an empty concrete shell, phase I & II ran through 1996, design, layout and construction supervision of initially 17,000 s.f. of state of the art exhibits, wall components, electronics, and materials. The Johnson Architectural Group worked in conjunction with the Monterey Bay Aquarium staff to create a world class series of exhibits, service areas, live and interactive exhibit areas and an award winning children's interactive play area.Successful coordination with Life sciences and other aquarium divisions assured a seamless union of architecture and living exhibits.

This project won numerous awards, with publications and articles too numerous to list. The Monterey Bay Aquarium was and continues to be renowned internationally as breaking new ground in almost all areas of exhibit design and construction.

Subsequent projects in the Aquarium included numerous temporary exhibits and background preparation for future exhibits and the build out of the remainder of the tenant areas. 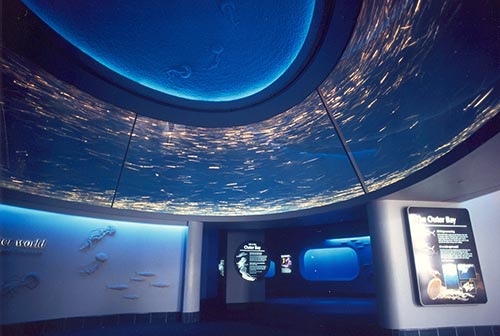